1 Year Zero-Waste, My Journey: How I did it and what I learned

This past May marked my one year anniversary being zero-waste. While I wasn't as zero-waste as I would have liked (my waste definitely DOES NOT fit into a jar at this point, no shame) I learned a lot through the process and all in all, made about half a garbage bag's worth of trash through the year. Really not all that bad, and damn did I work hard to get it there! I hope next year to do even better and continually reduce my trash outputs as much as I can. I still can't believe it's even been a year!

I hope to divert a lot of this remaining waste from going to landfill by turning it into a commemorative art project. I'm thinking something along the lines of collage or mixed media project...I am still experimenting with techniques but am eager to show it off once it's finished. I hope that this project will greatly reduce my trash from this year if not entirely eliminate it. I'll make sure to include all the details in an upcoming post. ;)

So, onto my first year as a zero-waster. I first started out in May of last year, the year I graduated from college. I was really into minimalism and reducing my possessions at the time, especially since I had moved to a super small apartment in my town. It wasn't too bad, but my husband and I quickly learned we would have to get rid of a lot of things to be comfortable in our new space. I was watching a lot of Youtube videos, reading articles, and listening to Marie Kondo's now infamous book on Audible while I whittled down my possessions. During that time I got rid of nearly everything I owned either by selling it, donating it, or giving it away to family members or friends. I kept the bare essentials and some sentimental items I wasn't ready to deal with yet. I was really proud of myself at this time, because I was able to make use of the (very small and limited) built-in storage my apartment had without having to rely on other pieces of furniture or organizing equipment. I felt so light during this process.

During this time, I also became very interested in picking up litter around my neighborhood because it was everywhere. I felt so strongly about it I figured the best thing to do was to just do something about it instead of complaining, and that turned into spending some weekend mornings collecting other's litter and garbage, hence my old blog name, "Litter Lady". All of my posts during that time are still available for reading if interested, located in the sidebar. 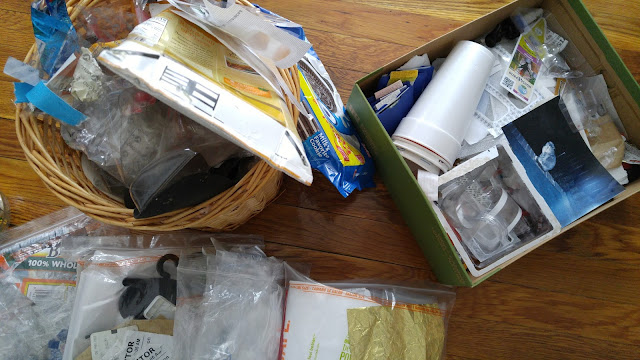 Then, through my research and reading online I came across the concept of zero-waste living. This was, in short, REVOLUTIONARY to me. There was so much I was attracted to about the lifestyle: minimalism, intention, eco-friendliness, reduced consumption, reduced waste, and more. Ultimately, what drew me to zero-waste was that I would actually be living and DOING what I believed in. There would be no doubt that I was DOING something about my waste and ultimately the planet's waste. I have always been more of a "doer" so zero-waste living really appealed to me as my actions would become my advocacy. Everything at this time simply "clicked".

I started small and as best I was able to. My apartment complex had no recycling program, and composting was not an option. There were also no bulk bin stores near where I lived, and the ones that did exist were almost an hour away and didn't include all the things I needed or bulk food staples. I was hard on myself at first because I quickly realized my waste was NOT going to fit into a mason jar. I did the best I could at the time, and while I knew I could still do better I stayed motivated. I saw month after month I was learning more about how to navigate my new lifestyle and it's challenges, and each month my trash reduced. I invested in items that would further progress my zero-waste goals (I will say that you really don't have to spend a lot of money to become zero-waste, but I found it easier to make the up front investment for glass jars, steel straws, and other items that have since paid themselves off entirely through use and usefulness - I'll make a post about this soon to help newbie zero-wasters).

It was hard, but like I said I learned. I learned what to avoid, I learned where to shop, I learned everything I could and practiced it as best I could. I still had a lot of limitations because of where I lived, and it wasn't until I moved into my current place that my zero-waste goals have nearly been met and my trash drastically reduced. Around this time my town opened its first bulk store (a Kroger) and I now had access to composting, recycling services, a real garden, a clothesline...as I've lived here my waste have reduced month by month. I couldn't be happier with my current situation. I also became a lot braver and more open about my lifestyle, sharing it with friends and family and doing typical zero-waste behaviors in public without a second thought (bringing along own napkin, straw and jar to restaurants, bringing glass jars to Thanksgiving for leftovers, bringing my own plate, spork, jar and straw to public events, the list goes on). Before what was really hard became really easy (or at least easier) and I found a lot of the habits I worked hard to form fully realized and second nature at this point in time.

Like I said, I still have a long way to go (as does my local community) but all in all I'm very satisfied with how I've navigated the process and feel that being zero-waste was one of the best choices I've made for myself for many reasons. I've built new friendships online through zero-waste Facebook groups, kindled my love for writing through managing this blog, improved my health and well-being by eliminating processed foods and harmful cleaning/beauty products, and feel, most importantly, for the first time in my life my actions match my words and my ideals. I feel a certain power in saying I am eco-conscious, eco-friendly, and an advocate for myself, others, and the planet and can prove this through what I do each day to reduce waste. There is no argument; I am doing something. The other zero-wasters I read about and talk to are doing something. And for me, that is everything.
Posted by Jordan Witherspoon